I don’t consider myself a food connoisseur, but I do like good food and I know it when I’ve had it. So tonight we decided to make a meal for ourselves of foods we have been served but never made for ourselves. 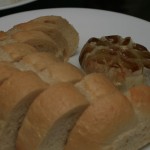 Last fall we were in Jasper and at one of the nicer establishments we had an appetizer that we loved. It was a head of garlic that had been somehow made to be as soft as butter and wonderfully sweet. You would simply scoop out the fruit and spread it on bread, wonderful! I assumed that it had been marinated or put through an elaborate preparation process, so we never pursued it. Then today, we watched a couple of episodes of Kitchen Boss and I learned a few things – Namely, that baked garlic is shockingly simple – cut the top off of a head of garlic, douse the top in olive oil, wrap in foil and bake at 350° for 40 min or so. This is certainty a new favorite. 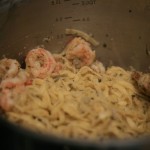 Although I can’t think of a time when I’ve had this, I do like Shrimp Scampi and Kara loves Seafood and Pasta – so it seemed like a good fit. We also saw this on Kitchen Boss and so we decided to try it. The Shrimp needed to be peeled and de-veined (really easy), and we also butterflied them so they popped open when cooked. I have never cooked shrimp from raw before, it was quite neat to see them change from gray to pink as they cook. On the show I learned that adding olive oil to butter will raise the smoking point and keep the butter from burning, something I struggled with while frying fish. So I’m glad to know that.

Anyway, the Shrimp Scampi Pasta was pretty good – perhaps 25% too much oil and 30% too much lemon juice. Next time it’ll be perfect. 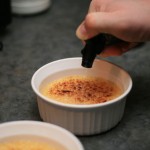 Once upon a time (July 16, 2010), we had Dave and Dawn over for supper and she brought the most wonderful Crème brûlée. Again, this is something that I thought was very hard to do, but Dawn assured me that it was very simple. So I found this great video on YouTube, watched it a few times through and tonight we made it for dessert. Except for some larger pieces of vanilla bean getting through our course strainer it all went pretty smoothly. We bought some Turbinado Sugar for the top, and I found it too course. Afterward, I tested some in our coffee grinder and made it quite fine – this works much better for burning the crust more evenly. 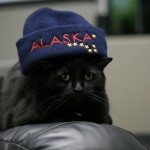 For those of you who read the title and thought we where cooking some kind of Alaskan Cat for dinner, Sorry. We did not do this. It is merely an introduction for this photo Kara took tonight of our Mitch-cat wearing an Alaska toque as he often does. Thank you all for persevering through 100 episodes of my ramblings, Keep checking back – You’ll never know when I might have something of value to say.

One Response to Dinner for Two – Alaskan Cat