As you might surmise from reading our earlier posts, Kara and I really enjoy the outdoors – sitting together next to a warm campfire. However, I would have a hard time saying that any of our camping trips were ever a challenge. We started camping out of the back of the car, in a cheap $80 Walmart tent and Kara’s little green cooler, but that was at a campground. The biggest challenge we faced was keeping the milk cold till breakfast the next day. From there it progressed to tenting out of the back of the Navi because we needed more room for the ever growing list of amenities that needed to come along. Then we got the Tent Trailer, and then the Travel Trailer we have now. We are both in agreement that this is as big as we would ever want to go and in fact a smaller more nimble device would suit us better.

But let’s face it, none of this is really “camping”… it’s spending time together, away from the distractions and busyness of life. And that’s all well and good, but it’s not camping. It’s too comfortable, there is little challenge, for example – If I build a shoddy fire that doesn’t want to burn, I whip out the propane torch and give it some incentive! And I think that is one of the reasons I was so happy to hear Kara suggest the Hunters Lake hike on the August long weekend. There would be some Jason sized challenges to overcome – what fun! Here is the story:

We headed north right after work on Friday and got to Sandy Lake and got set up in a “walk-in” tent site just before sunset. After a quick supper we turned in for the night. Saturday morning we were up at 5:45am and after a quick breakfast we drove to the Hunters Lake Trailhead. We got all suited up and started the hike at 7:15. It’s 12ish kilometres to of “moderate” terrain to the lake. After about an hour we came to a fork in the trail but found a signpost laying on the ground in the tall grass. It said “Hunters” (straight) “Spruce Reach” (right) – BUT there were two trails I could see, one straight ahead, one to the left. I assumed that the sign was supposed to be turned the other way and so we took the trail to the left. This mistake cost us about 2 hours and by the time I figured out we were heading south, we had hit the cut line at the south edge of the park. Thankfully we’d just got a “DeLorme inReach Satellite Communicator with GPS” (hereafter referred to as the SatCom) for use with our iPhone. Once I pulled out the phone and had a look I knew we’d taken the wrong trail. Once we got back to the fork, we realized that there was a third trail that was quite overgrown to the right and that is why we missed it. We should have gone straight… We sent out a quick message via the SatCom so that the people tracking us wouldn’t have a conniption. We were quite disappointed to have wasted so much time, but at the same time, happy to be on the right trail at last.

We planned to hike in the morning to avoid the mid-day heat, but we soon learned what that means when on an “unmaintained trail”. The tall dewy grass slowly saturated our pant-legs and socks. There were several low spots where the rain water had completely covered the trail. You could see that the water extended into the trees for a long ways and so there was little point in trying to side step it. We laid fallen trees over some of them and tried to hop along the edges of others. But slowly our feet got wetter and wetter. When we found a sunny clearing we stopped and took off our socks and pulled out our insoles and tried to dry it all out. Thankfully we’d brought extra socks! I think next time I’ll pack some flip-flops for these water crossings. The rest of the hike was pretty average, a fair amount of mosquitoes and tired, grumpy, wet hikers.

When we arrived at the lake it was not what I was expecting. We came up over the ridge and saw the first camp spot and I thought “That’s a nice spot”. When I looked around it dawned on me, “that’s it!” there are no other spots – It was perfect! Situated on a steep ridge on the North East side of the lake, the camp spot was in a clearing about 30 feet around with a fire pit in the center. There was a small outhouse about 30 feet further into the bush, nothing fancy, but there is nothing fancy going on in there anyway. We de-packed and started a fire to dry out our feet and footwear. This would be home for the next two nights.

I’ll try not to bore you with the activities of the day, but I will outline how we did things a little bit. Our water supply was collected from the lake and we ran it through a Gravity Works filter. Pretty impressive to filter 4 liters of water in a few minuets. We ended up using 16 liters over the weekend. For food, we carried in Mountain House Freeze Dried meals that you add boiling water to and then seal up for 10 minuets or so. They work really well and taste fantastic. We often split one single serving meal between us after we bulked it up with rice. We brought tortillas and pita’s and used them as plates, once the meal was done we ate the plate and the only thing we had to clean was a spoon(2).

To boil our water we have a cute little 700ml stainless pot that holds insulated two insulated plastic cups inside. It fits perfectly on top of a White Box stove which burns ethel-alcohol. We can boil 700ml of water in about 8 minuets.

We had a great time, the weather was perfect and we spent two days there relaxing in each others company.  The pictures describe it better, so I will leave it at that and let you see the photos of our time there.

The hike out we smartened up. I made gaiters out of white garbage bags and hip waiters out of green garbage bags. One the way out we hardly got wet at all and we did it in record time, 12km in 2hr 27min 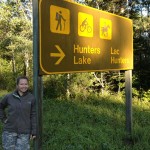 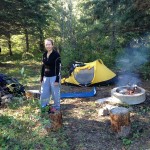 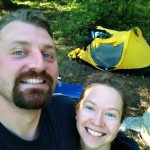 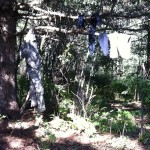 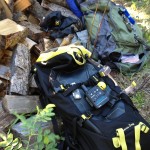 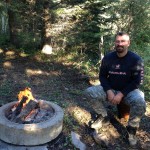 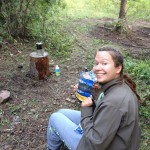 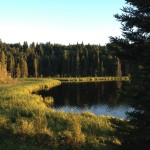 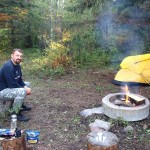 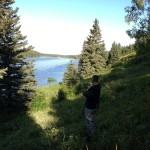 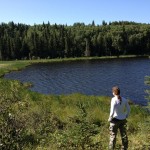 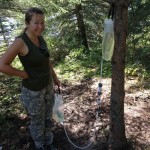 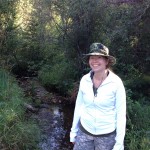 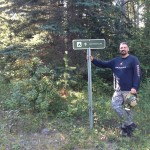 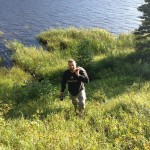 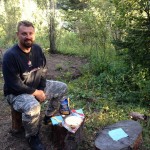 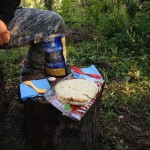 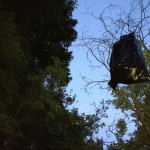 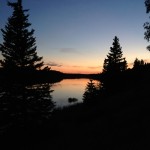 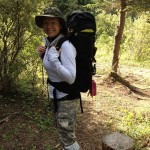 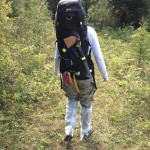 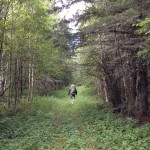 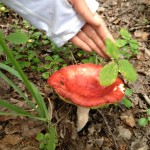 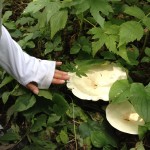 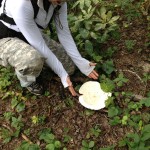 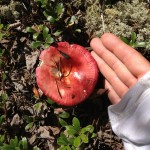 Posted under Adventures and tagged with Backpacking, Hunters Lake
Comments (3)