Posted by Kara on November 6, 2007
Well, here we are already into the fall months. What have we been up to lately? Actually quite a lot. After 5 months of anticipation, we finally got to see the Blue Man Group on S

ept. 15th. For all those that are not familiar with Blue Man Group, here’s the low down (thanks to Wikipedia) : “It is centered on a trio of mute performers, called Blue Men, who present themselves in blue grease paint, latex bald caps, and black clothing. Blue Man 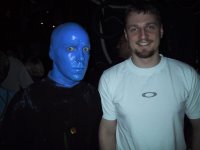 Group’s theatrical acts incorporate percussion instruments, odd props, audience participation, and sophisticated lighting. The shows are family-oriented, humorous, energetic and often employ thought-provoking satire on modern life.” I really enjoyed seeing the Blue Man Group live. Jason had actually seen them twice before in the States when he was there with work (see picture of much younger Jason in Chicago). He got to see the comedy show and what we got to see what called the ‘rock show’ – much more music orientated but still with a good dose of comedy.
On the last weekend of September, we spent our Saturday relaxing out at Pike Lake. The park had already closed for the season, but it was a beautiful fall day. We walked 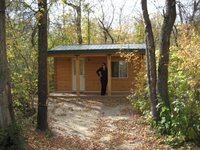 around the park, crunching through leaves, and came across these really cute cabins. Night Owl Cabins has recently added about 20 new cabins at Pike Lake. There are one and two bedroom setups. Each cabin comes stocked with electric heat and a fridge but sorry no other utilities. The cabins are actually available year around but you just have to brave the outdoor washrooms. Nevertheless, we booked an adorable one bedroom cabin for the next weekend. Of course we did our usual bulgogi on the outdoor fire pit. Tasty! It is nice to be able to have a place so close to the city to get away for an evening. If anyone is interested, check it out (http://www.nightowlcabins.com/).
For Thanksgiving, Jason and I were all by ourselves. I insisted that we had to have a traditional Thanksgiving meal so instead of a big turkey, I made stuffed turkey breasts. They were not too bad, if I 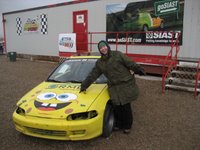 must say so myself! We also got 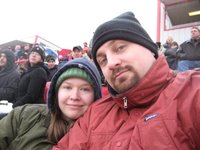 to take in the season-ender Ultimate Enduro race at Auto Clearing Speedway. This is the big event of the season and I have to admit that only the true fans came out the see it. It was VERY cold with a combination of rain and snow. Although it was uncomfortable for the fans, it did make for some spectacular car racing! Here’s a quote from the Auto Clearing website “The light steady mist/rain that fell all Sa 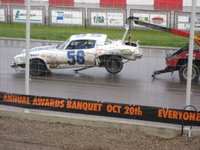 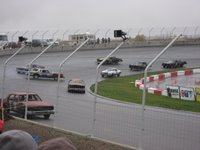 unique dimension to the Ellenn Plastics Ultimate Enduro. A field of 23 cars took to the track shortly after 2:00pm in the first of three 100 lap segments. The wet track surface provided drivers with some pretty slippery conditions causing many to unexpected lose control.” How exciting! Check out the pictures. You may wonder why the driver is backwards on the track. I bet he does too!
The weeke 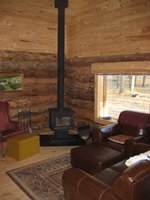 nd after Thanksgiving we went to another cabin near Tobin Lake (Nipawin area). We had been to this cabin before at New Years last year. Th 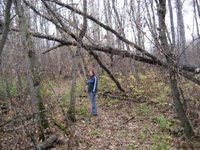 e one that we stayed in is a modern, two storey, fully furnished, beautiful log cabin with a wood burning fireplace. Absolutely perfect! There is not much to do for recreation, but there are 10 miles of hiking trails and lots of wildlife to view if you are patient. We did see a plethora of birds, some pheasant (I think…), and a raccoon that came to visit most nights. He was lured by the irresistible scent of hot dog buns! Don’t forget the live music; wolves and coyotes every night. We are looking forward to going back between Christmas and New Years this year. Anyway, hopefully we will be able to keep you updated before then! Later everyone!
Posted under Uncategorized
Comments (2)