Our day at Waterton National Park.

Jason and I have been to Jasper and Banff many times, but never to Waterton due to its “out of the way” location. Stopping here on the way to the states seemed like a perfect opportunity, and we definitely have not been disappointed! Waterton National Park is stunningly beautiful. The mountains do seem smaller than their brothers north of here. Since we are visiting the park so early in the year, the mountains are still covered with snow and so they look amazing!

We were fortunate to have great weather the past few days. As were were driving to the park from Lethbridge on Saturday we kept on asking ourselves, “Is that mountains or clouds in the distance”. Of course, it soon became clear that we were very quickly transitioning from the prairies to the mountains. These mountains really sneak up on you unexpectedly; no foothills here!

We asked the parks person at the front gates for “the most primitive spot, please”. She directed us 7 km away from the townsite on the Red Rock Parkway. We got a great spot at Crandell Mountain Campground, with over a 100 rustic camp sites to choose from! Even though it was the weekend, it wasn’t too busy and in no time we were settled in. After such a long day it was salad and Kraft Dinner by the campfire!

The next morning, after some relaxation and French toast, we drove the rest of the Red Rock Parkway (only 15 km). At the end of the road is, appropriately named, Red Rock Canyon. The abundance of red rock in this area was something, as a rock enthusiast, I had already noticed. There is a huge abundance of purply, red rock and also lots of bright green rock. Mix that with all the snow that is still on the ground, as it’s beginning to look a lot like Christmas! Red Rock Canyon was really neat. We did the 1 km hike around the canyon. Worth it since the view is far more impressive from the other end of the canyon.

After that we headed into the townsite. Just as I had imagined it with the big Swiss-looking chalet over looking the lake, with the townsite below. Unfortunately the Prince of Wales hotel was closed for the season so we didn’t bother driving up there. We took in the townsite, all four streets! The town is a quiet mountain town this time of the year. No surprise to see many resident deer and big horned mountain sheep. The one house must have had at least 20 sheep on the lawn eating grass. I guess that’s one way of getting out of mowing your lawn.

In the afternoon we took the Akamina Parkway (16 km) west of town. As far as the drive goes, the Akamina Parkway is more scenic than the Red Rock but not for those who don’t like heights. The narrow road climbs high up into the mountains with Cameron Creek way down below. This time of year Cameron Creek should be called a rushing river, not creek! It is very scenic. Unfortunately due to the late spring, there was too much snow for the vehicles to get to Akamina Lake and the road was closed. Being that we came all this way, we did the 3 km hike up the road to find 8th of snow still on the the lake. Some local people told us that they snowshoe this road in the winter. Even though the lake was covered in ice, it was still worth the journey.

On our way home we got the see a bear a few km from our campsite. A mother and cub were down in the mountain meadow and everyone was trying to get a good photo opportunity, even though they were quite a long ways away. We though at first it was a grizzly as it was brown. The fellow with the 1600mm lens told me that it was a cinnamon black bear. I am inclined to believe him since he could see the claws on that bear (shorter claws than a grizzly)! Wow, what a thrilling thing to see a lens that long, and the bear was pretty cool too! 🙂

Last night we had a visitor to our site. A lone deer being pretty brave to come right into our campsite and wandered around for 10 or so minuets. I guess they see people all the time, so they are pretty tame. As I was blogging this morning, I noticed another deer walk by the camper window!

Jason left for Lethbridge early this morning. We had to have a second muffler installed behind the first. This seems to solve the noise problem just fine. It’s nice to hear each other talk again in the vehicle! We are off to Montana later this morning and are staying at St. Mary’s just inside the park on the east side. Hope everyone enjoys all the pictures!! 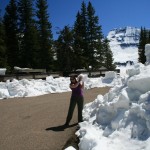 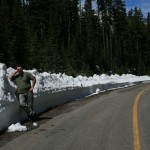 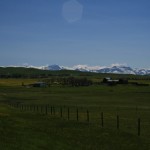 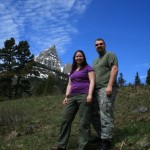 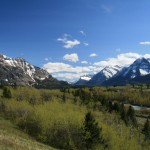 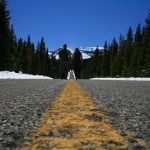 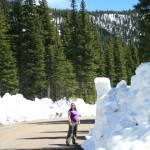 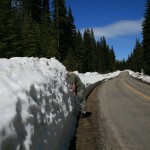 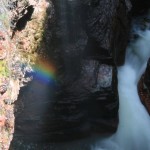 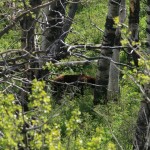 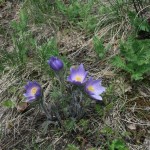 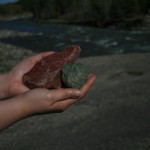 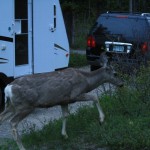 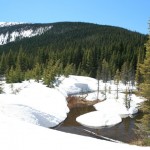 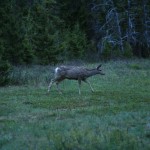 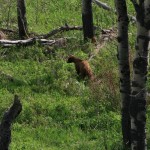 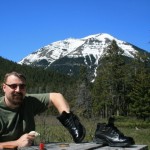 Posted under Adventures and tagged with Waterton
Comments (3)

3 Responses to Our day at Waterton National Park.