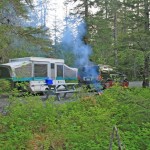 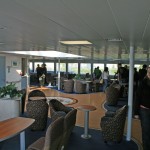 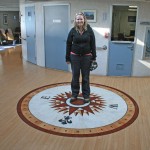 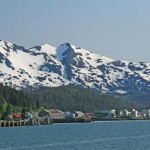 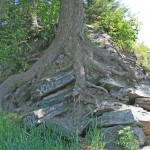 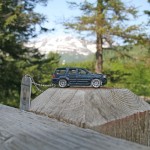 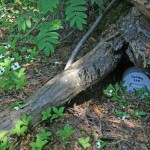 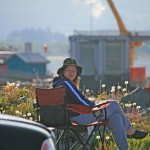 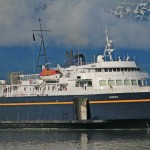 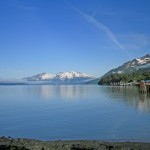 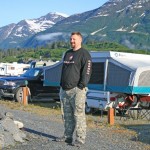 Today we woke up to a beautiful day in Valdez.  The sun was shining and the clouds were clearing away so we could see the tops of the mountains again.  In the morning the tides had gone out and we were able to watch the birds have their pickings of everything that got stranded.  We even saw a pair of adult eagles and two young ones that they had with them, amongst the birds of the low tide.  It was interesting to watch these eagles as the adult eagles would direct the young ones to the food and then vacate the area to let them learn on their own.  It was very cute to watch them as the tides started to come back in.  The two babies would try to move to the highest ground in the bay.  They would look down and see their feet in the water and just keep on staying right to the bitter end!  Finally the adults came by and they all took off.  Interesting fact:  Bald eagles get their white head when they are 3 years of age.  Before that they look all spotted with brown and white and not nearly as majestic as the adults.

We took advantage of the hot showers again at the campsite and then headed back into town.  We went down to the Alaska ferries office and picked up our tickets for our 4:30 sailing time.  We decided to grab a quick bit somewhere has we had already packed up our campsite.  We stopped in at the Edgewater Restaurant.  They served mostly just burgers, pizza, and wraps.  My chicken Caesar wrap was delicious but Jason said that his burger was mediocre.

We still had a few hours before sailing time so we decided to do some geocaching in the area.  We hiked up a trail that extends the length of one of the peninsulas in the harbour.  It was a very lush trail with many types of plants that I had never seen before, along with numerous kinds of ferns.  We successfully found the geocache at the end of the trail and left a Saskatchewan trinket and some travel bugs.  We left our Navigator toy car travel bug to commemorate our 2009 trip to Alaska.  We also located another cache along this trail.

We still had some extra time so we used the free tickets that we had got at the Valdez Museum to get into the 50 year state anniversary display that was located near the harbour.  They had recreated the original town site in miniature scale as it was in 1964 before the big earthquake.  It was interesting but we only spent about 20 minutes there.

After that we got a chance to watch our ferry come into the harbour.  It is called the Chegnuga and is a very new ferry.  It is in the Alaska Fairweather class and is built in a catamaran style.  This is supposed to give a much smoother ride that the old style ferries.  Also it is significantly faster topping out at about 80 km an hour.  The trip from Valdez took about 2 hours all together while the old style ferries take about 6 hours.  It is a really beautiful boat.  The floors are done in hardwood and the carpets and seats are very plush.  They have first class airline style seating, or restaurant style booths with tables; whatever your preference is.  They even had work cubicles if you would rather work than enjoy the view.  There is a childrens’ play area and a cafeteria with souvenirs.

The ride on the ferry was very smooth until we got into the open water.  It was pitching pretty hard for about 15 minutes or so, but settled down as we got back into the calmer waters.  It was a little difficult to walk around the boat at this time, but the remainder of the time you could easily stand and look at all the different scenic views.  We had an excellent day for this trip as there wasn’t a single cloud in the sky.  The scenery between Valdez and Cordova area is beautiful and a good portion of the mountains are still covered in snow this time of year.

As we were coming into Cordova one of the passengers pointed out that there was a sea lion sleeping on one of the buoys in the harbour.  We got only a quick glance as everyone clambered to see it.  The woman that pointed it out was a local and had signed a 10 year contract to teach school here in Cordova.  A 10 year contract!  We got chatting it up with her and she gave us some advice on the area.

We arrived into the dock at about 6:30 pm.  Loading the vehicles off the boat was very quick and we were on the road in at 10 minutes.  We decided to check out the local RV park located by the harbour.  The park was practically all full and I think that the majority of people were some kind of a community based traveling group.  The girls had long below the ankle dresses and the guys all had full beards.  The women wore colourful handkerchiefs on their heads and the boys all had fitted sport suits.  They all had nice campers and RVs.  The men were polishing their rims on their hopped up 4X4 and the women were tending to the children.  All very different!  We decided to continue on for 12 miles to the next campsite at Alaska River Adventures.

Cordova is against very large mountains similar to Valdez.  As you move out of the town there is a large lake that is very scenic.  We could see a float plane getting ready to land on the lake and there were also many other float planes parked alongside of the lake.  I guess when the only way out is by plane or boat, it would be a good thing to have a plane!  About 6 miles out of the town the scenery changes dramatically.  It radically changes from mountains to wetlands.  The wetlands stretch for miles and miles on either sides of the road.  At mile 12 we came to the Alaska River Adventures campsite.  Thankfully the scenery changes again and there are more areas with trees.  The campground has 20 spots all well separated from each other.  The vegetation in this campground is very strange.  The ground and all the trees are covered in a thick moss-like material.  It is very pretty but also a haven for misquotes!  Interestingly enough, a couple that we were camping beside in Valdez also came to Cordova and we are camping beside them again.  Jason and I, and the other couple are the only people here in this campground.  It is very quite here, almost too quite at times.  We are really in wild Alaska!  I wanted to experience something that was away from all the other tourist areas and think that we found it.  Cordova is a one horse town.  I have a feeling that these next few days will be a real adventure.  We are looking forward visiting the Child’s Glacier tomorrow.

Also: Jason wants me to ad that Kara was scared of bears and we had to have deli meats for supper.

One Response to Alaska Adventure – Valdez to Cordova