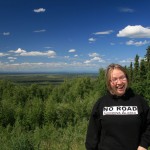 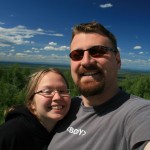 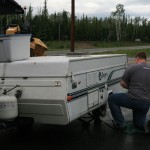 Not too much exciting to report for today.  We left Denali in good weather.  We packed up the trailer and headed into town to pick up a few souvenirs.  I was really wanted a good Denali print as we didn’t get an uninhibited picture of the mountain.  I was finding that even the expensive prints had some clouds in the picture, so I guess an uninhibited print is very rare.  After finding out that we were one Mastercard short of a full load wallet, we decided that it was time to leave tourists city.  Most likely we misplaced the card and even though we backtracked our steps we had no success.  We headed into Fairbanks and made it in early in the afternoon.

We grabbed some gas and Wendy’s and we were back on our way.  We ran into lots of rain outside of Fairbanks, so we missed out on most of the mountain in that region.  Any one that we did see paled in comparison to the ones we saw earlier on in the trip.  The rain was coming down really heavy, the worst we have seen in a long time.  The raindrops were huge and I was hoping that there was no hail in these cloudy.  All of a sudden we heard a terrible noise coming from the back of the vehicle.  We pulled over and here our trailer tire was shredded off of the rim.  We most likely didn’t hear it sooner because of the torrential downpour.  Here we had got a puncture in our trailer tire.  We had a spare so Jason changed it quickly.  The spare was little low and some friendly people with a bus conversion van with an onboard air compressor helped us out.

At this point we were only about 25 miles out of Tok, so we made our way in even with the pouring rain.  We thought about getting a hotel room, but couldn’t find much under $100 bucks and we are talking about really small town Tok sort of accommodations.  We decided to tuff it out in the rain with the pop up and really it wasn’t that bad.  We stayed at the Sourdough campgrounds where we had stayed before.  Clean showers and laundry.  I did one load just to tie us over until Saskatoon.  We had freeze dried noodles for supper.

Posted under Adventures and tagged with Alaska, Tire, Tok
Comments Off on Alaska Adventure – Denali to Tok