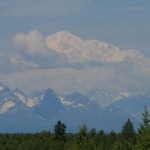 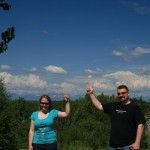 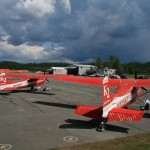 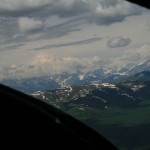 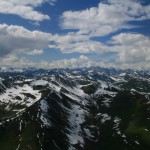 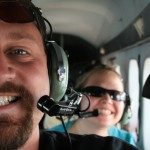 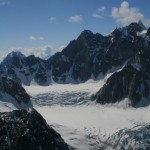 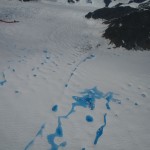 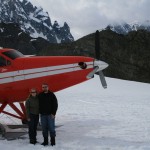 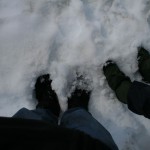 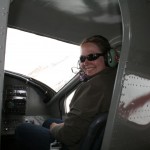 Today we woke up to beautiful weather in Anchorage.  There was the odd puffy cloud in the sky, but nothing to be concerned about.  We stopped for some gas and grocery before heading out of town.  We were wanted to make it into Talkeetna to book a flight seeing tour since the weather was favourable.  We started on the highway towards Denai, with little to no excitement.  We turned onto the road to Talkeetna and I said to Jason, “I think that I see a mountain but it must clouds because it is too high up.”  Sure enough it was Mount McKinley!  It was a beautiful, amazing white giant sticking out of the horizon.  We figured that we would be able to get a better view when we got closer.  We stopped just outside of Takeetna and got some photos, but by this time the clouds had started to move it.  The amazing uninhibited view that we did get of Mount McKinley was unreal; just too bad we didn’t get any picture.

We quickly came into Talkeetna and booked out flight seeing tour.  We were able to get on one of the later flights of the day.  We were a little concerned with the cloud cover coming in and were really anxious to get up in the sky.  We took some time and checked out all the little shops of Talkeetna.  It is really a neat little town, but you can really tell that it is totally gear towards the tourists, in particular all the cruise ship people.  We got a chance to look around and grab a bit to eat at a Swiss Restaurant.  We walked back in time for our 3:30 flight.

We opted for the tour of Mount McKinley that included a glacier landing.  When you book in for the flight they encourage everyone to take a pair of glacier boots.  They are these booty covers that you can slip over your regular shoes and walk all over the glacier when the time comes.  Good idea since it was so hot in Talkeetna it seemed like it should be the type of weather that you would wear sandals in.

After a quick safety orientation we were all loaded onto the plane, a Canadian made Otter.  Neat little plane that sat 8 people plus the pilot and room for a co-pilot.  We were off over the Talkeetna river and a great view of the miles and miles of marsh land in this area.  Our first scenic view for the day was over the Kahiltna Glacier.  This glacier is huge in size, stretching for miles and miles.  This was an interesting glacier as the top of the glacier appears like any other glacier, deep cold ice with pockets of melted snow and 300 feet spirals.  At the very end of the glacier is a massive flow of water coming out of seemly nowhere that they call the bubbling pond.  This is where all the water from the glacier is melted off and leaves this area.  The water is pushed out of this area with such furry that is causes it to bubble like a pot of boiling water.  The interesting fact being that for about a mile between the glacier and the bubbling ponds is full forest growth so the trees are actually growing on the glacier!

After the glacier we continued up towards Mount McKinley, passing mountains Foraker and Hunter.  Mount McKinley is such a massive mountain than even when we were right up close, it is hard to tell its sheer size.  We came up to the south side of the mountain, but it was difficult to see the top due to cloud cover.  We would catch the odd glimpse.  There is the Wickinnish Wall on the south side of Mount McKinley that we were able to see.  This is the largest single slap of granite in the world.  It is at an incredibly steep angle and the pilot commented that in the 70’s one man actually successfully skied down this side of the mountain.

One thing that was interesting was the fact that we were able to actually see climbers attempting this amazing mountain.  We saw about 4 base camps at various places around the mountain and at times could even see individual hikers.  That was pretty cool!  The pilot said that out of all the people that try to climb Mount McKinley, only 45% ever make it to the top.

After the views up close and personal with Mount McKinley we few to the upper part of the Ruth Glacier to an area known as the Great Gorge.  This area has amazing spires of rocks on either side and an interesting fact, the Great Gorge is the largest crevasse in the world (above water)!!  It is twice as big as the Grand Canyon with is a wonder of the world!  The pilot said that the there are some deeper gorges in the ocean floor, but who can pay the money to go and see those!  Another mountain that we flew over was the Mooses Tooth, not only fun to say but also a mountain that many people use to practice for the big Mount McKinley.  They is a deep separation in the mountain that is so large that the plane is able to fly through it.  They call this the Mooses Cavity.  Over course we got to fly though it, really neat to have the high walls of mountain on either side of the plane.

On the Ruth Glacier is an area called the Don Sheldon Amphitheatre and this is when we landed for our chance to walk out on the glacier.  As you can imagine, it is called an amphitheatre as you are surround by these amazing pillars of mountain.  On a good day you would have a great view of Mount McKinley here on the Ruth glacier, but today it was clouded over.  Too bad for us.  Everyone got a chance to get out and play on the snow of the glacier and take pictures.  Some people we even making snow angles.

We were requires to stay fairly close to the plane as the recent warm weather make danger of crevasses more apparent.  The recent volcano activity in March spread ash all over this area.  It was fine in the winter as it was quickly covered in snow, but as the snow melts, the black ash on the glacier was quickened its speed.  There are many areas on the glacier that they were able to land in recent years, that are not a possibility not.  The ash has caused the glacier to melt leaving deep crevasses.

It was time to head back home.  Jason being smart when the pilot asked who wanted to sit with him, put up his hand, so he got a chance to be the co-pilot for the way back.  Jason gave this privilege to me, and it was awesome.  I got to sit right up front with the pilot and see everything!  We flew back down the Ruth Glacier and you could see areas where it was calving into the water at the end.

After this a storm was brewing and the pilot had to be constantly radioing in to see if we were landing or no.  Since I was in the front seat I was getting an up close look at the storm with the lightening and all!  The pilot was very talented and we made it down just fine even with a nasty crosswind.

After our big flight seeing tour the weather was not good and the rain was really coming down.  Not the right weather to be setting up a tent trailer in.  We decided to head into Denali National Park.  The two hour drive passed quickly as the weather started to clear and we could see some mountains.  We pulled into Denali late and pick a campsite at the Riley River Campgrounds, on the park property.  We headed into town for supper at the Salmon Bake.  Everything was really good.  Not it is nearing 3:00am our time, so again, it’s time for bed!

Posted under Adventures and tagged with Alaska, Flight, Mount McKinley
Comments Off on Alaska Adventure – Anchorage to Denali