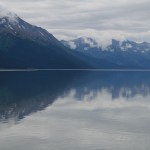 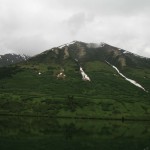 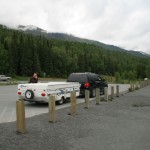 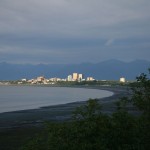 Today we packed up quickly and headed out from Deep Creek.  Although there wasn’t much for amenities, but was a great camping spot that we wouldn’t have found on our own.  It was neat to watch the fishermen and the eagles fighting with the sea gulls over the leftovers.  We worked out way back to Anchorage fairly quickly as we were going over territory that we had already been though.  It was a fairly cloudy today and we did run into a few seconds of rain.  Not great for mountain viewing.  We turned at the intersection where you could go to either Whittier or Anchorage.  Here we got to see some new territory.  The railway runs alongside of the road the whole time, and as you get closer to Anchorage, the train runs right beside the ocean the whole time.  It is a really pretty view coming into Anchorage as you are driving right beside the ocean.  There is sheer cliff mountain on one side and ocean on the other.

We seemed to make really good time into Anchorage.  The city looks just like any other city, except for the over abundance of forested areas in the city.  No wonder Anchorage has 1600 resident moose, 300 black bears, and 36 grizzly bears.  Imagine turning on your radio going into work and finding out you are going to be late because there is a moose on the freeway!

We first checked out the campsites at Ship Creek, but the area looked a little like our 20th street so we moved on.  We ended up staying at the Golden Nugget near downtown.  There are over 200 campsites, but they are right in town so it is a little noisy from the city traffic.

We supper to went to Tofu Restaurant for Korean BBQ.  We tried two other Korean BBQ places but they were closed on Sundays.  We couldn’t eat any more seafood!  We need to have some down home good Korean BBQ.  The Bulgogi was good but instead of you doing it at the table, they prepare it all for you in the kitchen.  Kind of takes some of the fun out of it.  Usually with Korean BBQ you are served a variety of side dishes, usually variations of kimchi (fermented vegetables).  I found it odd that they also served a small entire fish with our meal.  I guess an Alaskan variation to Korean BBQ.  They were also had on in the background a Japanese program, similar to our American Idol.  I got to see a Japanese yodeler which was pretty cool.

Anyway, after that we went to check out Earthquake Park.  My parents had been there when they came to Anchorage, so I thought that we could go and see it.  Much to our surprise, the place is completely covered in trees and practically impossible to navigate though.  I walking path was made to commemorate the earthquake, but we couldn’t see any of the damage this many years after.  They had a few signs that we read and we thought that we would go for a walk on the path, but we were quickly turned back when we got hit my swarms of mosquitoes.  The worst mosquitoes Jason’s had even seen, and I only recall one time worse when I was a little girl.  Needless to say we did not walk the trail all the way, and we were disappointed that we didn’t get to see more.   Tomorrow we are off to the big National Park.  The last big attraction before we go home.

Posted under Adventures and tagged with Alaska, Anchorage
Comments Off on Alaska Adventure – Deep Creek to Anchorage