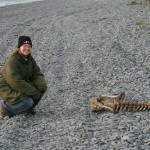 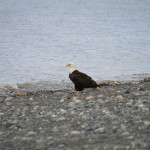 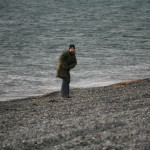 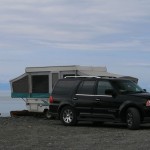 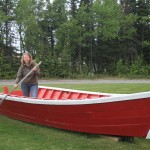 So hard to believe that we have been gone for two weeks!  The time has just been flying by and I find myself wishing for another two weeks.  Today we packed up camp in Sterling and headed around the peninsula.  The time is counting down and we have to be thinking about how much time we want to leave for the drive home, so it is time to move on.

The first place that we came to was Soldonta, only a short distance from our campsite.  Soldotna is the most modern city we have been to since being in Alaska.  It has all the big stuff like Home Depot and lots of fast food, the makings of a modern city.  Very close to Soldotna is its sister city, Kenai.  It is about the same size and surprisingly they are located within about 5 miles of each other.  I would have to say that both of these cities do not seem to be set up for tourism, and there really isn’t much to see there.  If you go into Kenai then you will come across a decent view of the ocean, but other than that, it is just like any other city.

We didn’t spend too much time in Kenai.  We stopped in at the visitor center just to make sure that there was nothing that we missed.  After that we went back to Soldonta (the only way to get back onto the road to Homer).  We stopped at a little restaurant that was recommended by the Fommers guide.  It was called Mykel’s and reminded me a lot of Mr. Rizo’s in Saskatoon.  A little on the fancy side and in a place that you would never expect it!  I both had salmon since that’s what they were advertising.  It was good but most likely a place that you would go to for supper though.

After that we started to make our way towards Homer.  We didn’t end up taking much for pictures because there is nothing really special for scenery.  Surprisingly there are lots of lush green trees of all sorts along the side of the road.  There is not much for mountain views and there is not much to see until after Clam Glutch.  Then you can start to see bits and pieces of the ocean poking out from between the trees.

The friendly people that were the campsite hosts at Childs Glacier were from this area and they said that the place that they go is Deep Creek.  We decided to check out the Deep Creek State Recreational Park and stayed there.  It is right beside the ocean and again we were able to get oceanfront property.  If you look across the peninsula there is a range of mountains on the other side.  Although there was cloud cover for most of the day, we were able to see to see the mountains on and off.  There is one mountain directly across from us that is huge and although I have not been able to see the top yet, I can tell that it is a giant.  Also this location has a most excellent view of the active volcano in this area.  Every once and a while we can see a big puff of smoke coming out of it.

We decided to drive into Homer for supper later on in the day.  Homer has a beautiful view of the ocean, one I hope to see better while we are here.  I went to Fat Olives for supper.  A really cute Italian style restaurant that was made from an old school bus garage.  The pizzas there were incredible, about the size of my arms held out in a circle.  They had lots of neat entrees to choose from; Jason had a pork dish and I just couldn’t resist ordering a small pizza.  Still could only eat half!

We came back to the campsite to plunder the beach for treasures and get some pictures.  We sat by the beach and watched all the people come back with their catches of the day.  Everyone seems to be bringing in halibut at this time of the year.  The people that just came in caught a 40 lb halibut, but consider the fact that they can get to be as big as 400 lb!  Jason got to watch one of the people next to us filet his halibut.  He had caught about 20 of these fish with lots of other people to follow the two fish per day per person rule.  He was kind enough to give us a few halibut filets.  They will be on ice until tomorrow.  We will be looking forward to that!

Posted under Adventures and tagged with Alaska, Deep Creek
Comments Off on Alaska Adventure – Deep Creek