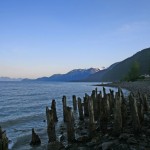 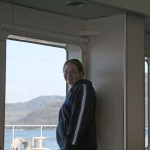 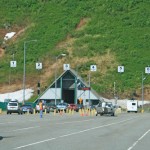 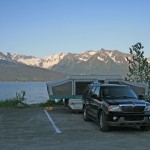 Today we got up really, really early (5:00 am) and quickly packed up to head back into Cordova to catch the ferry.  When we went on came in on this road on Sunday it was really terrible so we planned about 2 hours to go the 50 miles into town.  The campground hosts had mentioned to us that they had been working on the road, and much to our surprise the whole 50 miles into town had been graded.  What a treat!  The road was very smooth and we sailed into town in a little better than an hour.  At 5:00 am we were the only ones on the road with the exception of some road crews that we working.  It’s kind of funny because Cordova reminds me of small town Saskatchewan in the fact that everyone waves.  We were coming into town at 5:00 in the morning and everyone is waving.

Since we pulled into town an hour early we stopped at the Killer Whale Cafe again to grab some breakfast before the ferry.  Nothing overly special, but a good place for breakfast.  After we ordered, the waitress let us run across to the only other business open in town at this time and purchase a few Cordova souvenirs.  Again, another small town trait!

We made it to the ferry dock with lots of time to spare.  We had to load by 7:30 with the ferry departing at 8:30.  When we came in on the ferry there was lots of room under the deck for vehicles, but leaving Cordova was a different story.  We were packed tight like sardines.  I guess in times like these you want to make sure that you gave Alaska ferries your exact truck and trailer measurements!!  You don’t want to be the one that gets left behind!

As the ferry slowly made its way out into the bay, it was very difficult to see.  There was lots of fog on the water and we could hardly see anything in front of the ferry.  Good thing that the captain has radar!  There was really nothing to see with all the fog, so I got a chance to catch an hour of shut eye.  About half way through the trip the fog cleared and we were able to see the coast line.  It was spectacular!  We could see mountains, waterfalls, and glaciers in the Prince William Sound.  We pulled into Whittier at about 11:30am to clear and sunny skies.  Whittier is another small fishing town, but its roots are much deeper than that.  It was used as army post during the war.  You can see still the old army complex where all the people used to live.  That building is no longer in use but there is another similar complex that was constructed more recently.  It is one large building that houses all the people, the school, and the stores.  In the winter the people never have to leave the building.  Sometimes I wish we had something like that in Saskatchewan.  I’m not totally sure, but I think that this area is still used for military purposes.

There is really nothing in Whittier.  There are a few small shops that have been set up on the harbour but you can really tell that these were just put there for the tourists.  There is only one road out of Whittier and that is through a mountain!  A tunnel was blasted out of the mountain and is over 5 miles in length.  It is a one way tunnel so they open up one side and let all the traffic though and then open the other for the opposite direction.  This tunnel is also used by the train, so when you are driving through the tunnel you are actually driving on train track.  It is an impressive tunnel but there really is only room for one vehicle at a time.  As we were driving though the tunnel there was water coming down from the roof.  It seems a little freaky going through this tunnel that has been cut of out the mountain knowing that you have 5 miles until you are out.  They do have a few save houses throughout the tunnel when you could go in an event of an emergency, but they are of course, for people only.  Forget the vehicle!  This is the longest car/train shared tunnel in North America.  It was very cool.

We continued on the Seward Highway which has lots of similarities to the road into Valdez.  There are huge mountains and again the smaller moss covered mountains.  There seems to be lots more taller pines in this area and also many beautiful emerald lakes.  The roads were very good into Seward and some areas they even had passing lanes which was a treat.  We made it into Seward in mid afternoon and set up camp at the Waterfront Park (the city RV park).  It is definitely not the nicest RV park in the world, but it is hard to pass up an oceanfront view.  Once we set up camp we had a little nap.  We needed it after getting up so early.

After our nap we showered up and went for supper.  We decided to go to Ray’s on the Harbour.  It is a neat steak and seafood restaurant with a great harbour view. It had just enough class to feel like a nice restaurant, but not so much that it was stuffy.  We ordered Alaska King Crab legs because, hey, we are in Alaska!  They were amazing!  Juicy and delicious!  They also had the best spinach, artichoke, and crab dip we had ever tasted.  I would highly recommend if you are even in Seward.

As we were about to leave the restaurant one of the waitresses pointed out that there were land otters right up beside the restaurant’s fire door.  She called these land otters and then come out of the harbour and try to get under the deck of the restaurant!  They were cute little fellers.  I noticed that one of them was scratching with its hind leg behind its ear just like a dog!  After all that excitement we went back to the campsite.

Now I am just ending off my day sitting here by the ocean writing my dairy.  The sun is just starting to peak behind the mountains and the sky is turning pink.  The cool ocean weather has brought in a fog and the mountains all have a bluish ting.  I was just watching an otter of to my right, but other than that the beach is quite.  It is very beautiful and relaxing.  We are looking forward to our whale watching tour for tomorrow.  Best get to bed since we have another early morning.

Posted under Adventures and tagged with Alaska, Ferry, Seward
Comments Off on Alaska Adventure – Childs Glacier to Seward