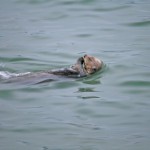 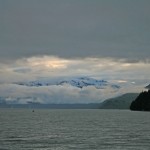 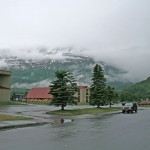 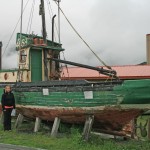 It is hard to believe that this is our seventh day here and that we are one-third done this big Alaska adventure.  Today we decided that it was time to sleep in.  We knew that there was rain predicted for today so when I woke up and looked out the window, I figured that it was a sleep in sort of day.  The clouds had moved in and the beautiful mountain view that we had before was gone.  After sleeping in for a very long time, we had a quick breakfast snack and a hot shower.

In the afternoon we decided to leave the comforts of the trailer and head into town to see what we could see.  We hit up the Halibut House to see what Alaskan fish and chips were like.  It was very good and the fish has a minuscule amount of oil on it.  Normally fish and chips are so greasy but these halibut sticks were done in a cornmeal batter and were delicious.

Since the weather was not very favorable for any outdoor activities we decided to check out the Valdez Museum.  It actually was fairly interesting.  Valdez does have a very rich history.  We got to see everything from the history behind Alaska joining to the United Stated (50 years ago this year) all the way back to the original native people.  There were many native artifacts and also many artifacts from the Gold Rush era.  They also talked about the big earthquake from 1964 and the more recent Exxon Valdez oil spill.  They also had an interesting old lighthouse lens fixture and some early firefighting vehicles.  Nothing there was really overly special or amazing, but it was an interesting way to spend a rainy afternoon.

After the museum we hit up a few local gift shops.  I find that many of the gifts are made in China, which is fine for some things, but it is nice to actually get something that would be made in Alaska.  We went to one store that had handmade carvings all made by people from the same family.  The father, daughter, and son all did carvings.  They also featured a few other artists from the area.  This was an interesting shop, but most things were a little out of our price range.  We went to another shop in town and picked up a few other trinkets.  Jason got a really nice long sleeved T-shirt with ‘Valdez’ on it.

We headed back to the campsite as it was time to get the weekly laundry done.  We finished that up and headed back into town to pick up groceries for our trip into Cordova.  Valdez actually has a really nice Safeway that has everything that you could ever need.  Even fishing gear and rubber boots at Safeway!  One thing that we thought was amusing was the lack of seafood at the local grocery store.  I guess locals can just go out and catch whatever they want.  We picked everything up for the next 3 or 4 days and headed back to the campsite.

We were doing our supper on our granite fireplace by the ocean when all of a sudden Jason goes to me, “sea otter!”  The sea otter was something I really wanted to see in Alaska.  There was one little sea otter floating away on his back nibbling at some sort of food.  The tides were quickly carrying him down the bay so by the time we got out the camera he had floated a long ways away.  Jason and I were running beside the ocean and fast as we could to keep up to him.  As he entered the harbour we got a good look at him.  Super cute!  I guess I can’t complain about not seeing a sea otter at the Sea Otter RV Park now!

My Frommer’s guide suggested that Valdez is a great place to visit, but not necessarily for an extended period of time.  I can understand that now as we have been here for two days and I really feel that we took advantage of everything that Valdez had to offer.  This place would be the perfect place to do any sort of fishing charter or glacier cruising.  As for that, I am hoping to see many glaciers tomorrow and the fishing will have to be left for another day.  Valdez is in a beautiful location and has scenery like no other I have ever seen.

Now it is the end of another day and I find myself sitting here by the ocean typing this diary.  The rains subsided in the afternoon and it is still a little cloudy, but it is so tranquil here by the ocean.  A huge fishing vessel just made its way into the harbour.  Done for the night, I guess.  The gulls are doing their thing.  It seems like they never sleep.  I think that it about 2:30am in the morning our time.  The abundance of sunlight makes it difficult to tell time.  Best call it quits for the night.

Posted under Adventures and tagged with Alaska, Camera, fire, Museum, Otter, Valdez
Comments Off on Alaska Adventure – Chillin in Valdez