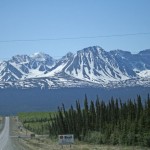 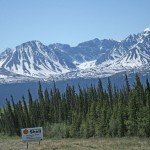 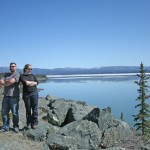 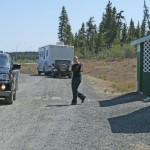 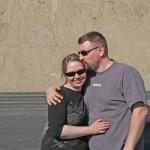 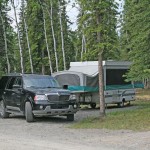 So today was another BIG day of driving.  We woke up early, 6:30 or so and quickly packed our campsite at Teslin Lake.  After a quick bite we headed into Whitehorse.  We had a beautiful morning and there was hardly any traffic so we made it in good time.  We stopped for gas and a well needed car wash.  After that we went into downtown Whitehorse to get a good look at the town.  It is a very interesting town, in a good way.  It has the feel of Banff with about 1/10th of the over-hyped tourism.  People seemed very casual and the stores have an old time “gold-rush” feeling to them.  We liked it – the right mix of tourism and Klondike.  The people that were there seemed like they were actually from there (unlike Banff!).  Our gas station attendant looked like he just got back from panning for gold – full beard and all!  We stopped for a quick bite at Doc’s Diner.  Also hit up a souvenir shop and a camera shop to get some dust out of our camera.

After some time in Whitehorse we started back on the Alaska highway towards Tok.  I guess we have to take back what we said that the roads were great on the Alaska highway.  Although the Yukon and Alaska likely had good intentions when paving the Alaska highway, it is not all paved at the same time.  Local people say that some sections have to be completely torn out and rebuilt so as a result, long sections of the highway are missing every year.  Everyone we spoke to said to bring 21 rolls of duck tape, 4 spare air cleaners, 2 spare fuel pumps and a complete set of tires.  Although it is easy to write off these comments sighting recent improvements in the highway, some of it isn’t such a bad idea.  We also noticed a number of small gas stations that had dried up.  There are only a few still in business, most have closed up shop probably due to more reliable and efficient vehicles that can travel much longer distances on the same gas.

The mountains between Whitehorse and Tok were fairly small in size with the exception of Haines Junction.  All of a sudden you come over a hill and one would think that you just entered the Swiss Alps.  Huge, snow covered mountains line the sky and they are absolutely breath taking.  Right at Haines junction you feel very close to them, but of course the highway takes the path of least resistance and we quickly moved out of them.  There was not much for wildlife today, but we did see one lanky moose on our travels.

We passed over the US bordered with no hassles.  I can’t believe we worried so much about bringing our lentil soup!  After the border we hurried along as it was difficult to see the mountains anyway.  I think it was either cloud cover or smoke.  Difficult to tell but we did get a few pictures of our 1st look at Alaska.  Pictures just don’t seem to do the area justice.  You just have to been there.  The valleys are so vast and covered in trees as far as the eye can see.  In some areas the trees get very stumpy but for the most part they are still tall pines.

We pulled into Tok at about 8:00 Saskatoon time, so supper time in Alaska.  We decided to stay at the Sourdough RV Park as we were craving hot showers and internet.  We used the RV car wash to get all that Yukon mud off, AGAIN!  It is the most abrasive material you could imagine. We made it into the Sourdough campgrounds just in time for the nightly pancake toss.  Everyone gets two pancakes and a chance to toss them into a bucket.  The prize is free breakfast.  I guess we will be having cold cereal tomorrow!  Jason ran into town and grabbed two bags of ice.  We were still running off of the ice that we got in Saskatoon.  It has been 4 crazy days of driving but we are looking forward to having 2 days to leisurely make it to Valdez.  Finally start relaxing and enjoying Alaska!

Posted under Adventures and tagged with Alaska, Camera, Tok, Whitehorse
Comments Off on Alaska Adventure – Whitehorse to Tok Alaska