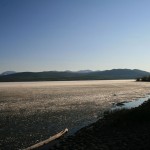 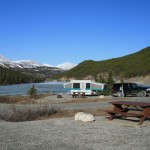 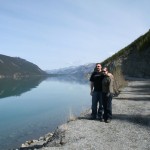 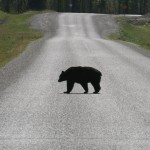 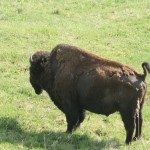 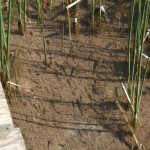 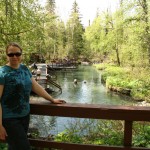 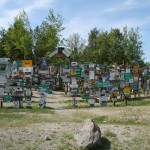 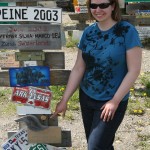 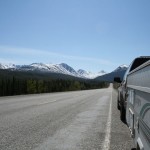 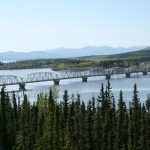 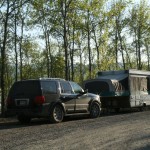 Another busy day of driving!  We woke up fairly early this morning to absolutely beautiful blue skies.  Our camping spot was even more spectacular than it was the previous night.  We had a quick breakfast and started to load up the trailer.  Upon starting the truck to hitch up the trailer I noticed a sound that definitely was not normal.  When we backed up the truck late, late, last night we had just scraped the edge of one of those hidden decorative boulders.  This caused the tailpipe to bend the slightest and rattle against the truck at a certain RPM.  The sound was not pleasant!!  We were not looking forward to driving for 10 hours with this noise and asking Jason to bend 3 inches of steel, also not reasonable.  Jason tried to put pressure on it and bend it down, but that didn’t work.  Jason being the ingenuous one, used our tow straps and a cement pillar, resulting in one straight tailpipe!!  I guess you have to get a little creative when there is no mechanic for 400km!  Of course guess who shows up just as we finish up.  Yup, the park official!  He seemed to be understanding which was awesome (considering we had tow straps wrapped around the park cement sign)!  So on our way!

We started descending down the mountains making our way out of the Rockies.  We couldn’t have asked for a nicer day to see this area.  We sighted a caribou for a quick second, teaching me the lesson to make sure that I have my telephoto lens on!  In about an hour we reached Muncho Lake and it was spectacular!  It is just the most emerald green color that you could ever imagine.  I would have to say even more so than the lakes around Jasper and Banff.  Some of the lake was open but for the most part it still had a decent amount of ice on it.  We just missed a float plane taking off on the clear part of the lake.  Around the lake area we came across a sheep on the road.  If you have ever been to Jasper or Banff then sheep on the road would come as no surprise.  They just can’t seem to get enough of that salt on the roadside.

We were only a few minutes away from Muncho Lake area and we came across a black bear on the side of the road.  Just one lone black bear; not too concerned about the vehicles.  We were able to get a few good shots before he meandered off into the bush.  Still waiting to see the grizzly!  Just not too close to our tent trailer.  We found out that there are also wild bison in this area.  As soon as we started to get out of the Rockies we noticed a considerable about of animal dung on the sides of the road.  The warning signs for bison clued us in.  We did get to see one loner bison on the side of the road.

Both Bud and Pam had stressed to Jason that we should stay at Laird hot springs, so we decided to stop in and at least see this place.  The recent bear on human contact, resulting in the death of two (people that is, not bears) encouraged us to holster up our bear spray before walking the lengthy boardwalk to the hot springs.  The path to the hot springs is several hundred meters long resembling something like a boat dock going over top of the marshy ground.  On the way we noticed a very small fish in the hot pools of water.  They are called lake chub and have adapted to the conditions of the geothermal heated water.  The facilities at the hot springs were as good as could be expected and the water was incredibly clear, however it would take some getting used to with all that sulphur smell.  We walked further to the hanging gardens and took some pictures.  It is a large rock formation that gets covered with wild flowers and plants.  We were a little too early in the year to really enjoy that. It was nice (and stinky), but we are not hot tub kind of people, so the place had little appeal for us.

We continued along the highway again which follows closely with the Laird River.  It is actually a huge river system and very scenic.  We stopped for a few pictures.  As we got closer to Watson Lake the lack of mountains become quite apparent.  We were back in the foothills for a while again.  We came across a whole bunch of horses in the ditch.  Not really sure if they were wild or not.  We didn’t see anything resembling a farm for about 100 km so perhaps they were wild.

We got to Watson Lake around mid afternoon.  Grabbed some gas and groceries and made a quick stop at the Signpost Forest.  It is a huge area with posts covered in signs from all around the world.  Some people take actually road signs from different places while others make homemade ones or use licence plates.  We came across a few from Saskatchewan.  Of course, we had to leave our mark and left one of our homemade geocoins for everyone to enjoy.  I think that we should definitely get the award for the smallest sign.

We continued on past Watson Lake into the Cassiar mountain range.  We hit a little bit of construction and plastered the trailer up really good.  We continued on with hast as we wanted to make it to Teslin Lake.  We were hoping to stay at Muckluck Annie’s, but they were all closed up so we stayed at the Teslin Lake Campgrounds.  Not too much overly special but there is a great view of the lake. The lake is pretty much all frozen over this time of the year.  We opted out of having a fire or much outdoor activities due to exhaustion and crazy mosquitoes.  Tomorrow we conquer the rest of the Yukon!