Sunday morning we got up just before 7:00am to drive to Crater Lake and still get back to the trailer before check-out so that we could make our way south. We have to start making some mileage!

We quickly ate a few muffins and some fruit and started on our scenic drive. The landscape in this area is still lush green mountains, with some ranch style land in the lower lying areas. We are still amazed at the amount of snow still in the higher elevations. At the top, the snow is still 8 to 10 feet deep. When the park is opened in the spring the snow removal crew have to remove snow that is 30 feet deep! Only a small stretch near the lake was cleared when we arrived, and it will take them 4 months to finish!

Anyway, we visited the visitor center which we had to access through a tunnel. In fact, all the buildings up here have a covered walkway which leads from the road to the building so that it can be accessed in the spring.

Finally we made it up to the lake and what a view! I wish I had a lens wide enough to show you how huge and blue it was. We stayed and admired the view for a while and took some pictures. This 6 mile wide 4000ft deep crater was formed when the volcano erupted and the lava pocket underneath was emptied and could no longer support the peak. It then collapsed into itself leaving this great big void which then filled with snow and rain.

We hurried back and hitched up and headed south. We didn’t quite know how far we would make it, we just planed to get as far as we could. It was another case of blindly following TomTom through Sacramento – no problems.

The landscape slowly dried up and we were soon in a dry arid desert scape with only one mountain on the horizon. The longer we drove the bigger it got, until we where right under it – and as fast as it approached, it was gone.

We drove until nightfall, 945km – I’ve gone longer, but not doing 55mph pulling a trailer. The one good thing I can say is that pulling so slow and with a tailwind, is that I made great fuel economy – 18L/100km average for the day. That’s pretty good for us.

We stopped at a RV park we saw at “French Camp”, just south of Stockton. We were glad to be through the big cities before Monday morning traffic hit.

In the morning we treated ourself to the $6 breakfast buffet and continue to Yosemite. We found a camp spot, dropped the trailer and headed for the sights. What a disaster! Every roadside pulloff was so crowded that it was almost unsafe. The further we got to Yosemite Village the worse it got. We could not stop anywhere and we could not get anywhere! It was a huge traffic jam. Way too busy! We managed a few snapshots, but nothing good. We plan to get up really early again tomorrow and see how we manage at Yosemite 2.0 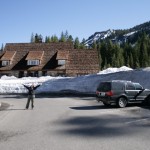 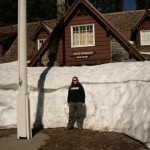 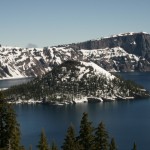 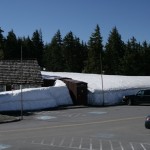 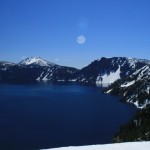 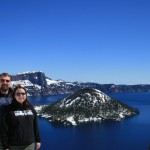 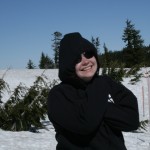 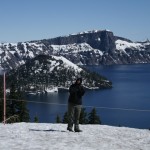 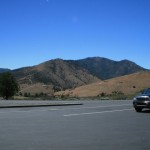 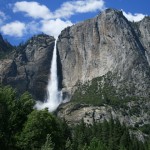 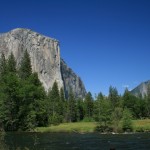 One Response to Crater Lake and Yosemite