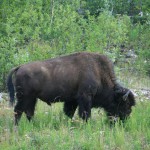 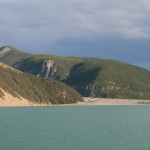 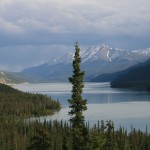 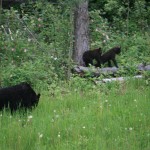 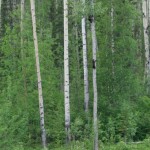 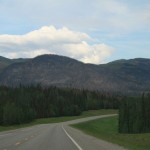 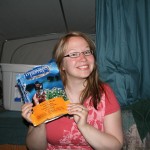 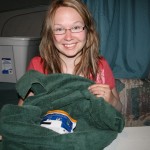 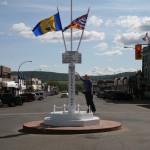 We packed up the trailer in Whitehorse and headed into town in search for a Timmy’s as we had been deprived for 2 weeks! I was really craving a cinnamon raisin bagel toasted with strawberry cream cheese. Sounds strange, but it is excellent. I have to give Jason all the credit for that combination. After this we were on the road. We really liked Whitehorse and would have like to have stayed for longer. There is a really nice lake just outside of Whitehorse called Marsh Lake that would be a great lake for boating and fishing. It is very scenic, all surrounded with mountains.

There was not too much exciting to tell. We had really good weather for driving. As we were getting close to the Laird Hot Springs we could see lots of wildfires. There was nothing very threatening close to the road but we could really see all the effort that was being put into controlling the fires. It seemed liked the fires were smoldering really close to the ground and many of the tall trees were not even affected by the fire. Some areas you could tell that the fire had burnt much hotter.

Muncho Lake was our destination for the evening. Shortly before Muncho I noticed something moving in the ditch and here it was a black bear. When we stopped we noticed that she had two little cubs with her that were hanging out in the bushes. She was enjoying all the greenery along the side of the road. Perhaps the wildfires had pushed her out towards the roadside for food. The dandelions were going to seed and she was covered in dandelion fuzz. The baby cubs were play fighting with each other and standing up on their hind legs. We watched them for a while and then the babies decided that they would try their hand at tree climbing. They both climbed up really high into trees, about 100 feet up! I couldn’t believe that they could even climb that high. The one baby actually climbed from the original tree to another tree branch on a near by tree. I couldn’t believe that they could climb so high and so fast. Like little monkeys! The mother didn’t seem to care either way. We didn’t stick around long enough to see how they got down.

We headed onto Muncho Lake. There has been lots of campers going towards Alaska when we have been coming back. The first campground was full but were we fortunate to get one of the last spots of Strawberry Flats campground, which was the campground that I was wanting to stay at. It is just a steady stream of motor homes going towards Alaska, so I think that it was really good that we went so early. We got a great spot near the lake which is a beautiful lake. We just got everything set up and the rains started. Enjoyed some more dehydrated foods.

Posted under Adventures and tagged with Alaska, Muncho Lake
Comments Off on Alaska Adventure – Whitehorse to Muncho Lake