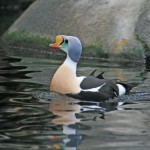 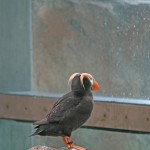 We didn’t do a whole lot today in Seward.  We woke up to wind and fog, again, but we are thankful that it is not rain!  Since I wanted to make sure that we had lots of time for the Sea Life Center, we decided to go there first.  After a quick breakfast of Cheerios we were on our way.  The Sea Life Center got three stars with my Formmers Guide, so I was really excited to see it, even with the exasperated cost of $20 per person.

As most of these places start, we went through all the boring stuff first.  Lots of little exhibits with fish and more info on the Exxon Valdez spill.  It seems like the big events like the Exxon Valdez and that huge earthquake had such far reaching effects to all these fishing towns.

The wildlife exhibits were very disappointing.  In total we saw two seals and a pond of diving birds.  The sea otter exhibit was closed and there was construction going on which made the center very unpleasant.  They were jack hammering just outside of the sea lion exhibit and the noise echoed though the entire building.  I was really surprised that they were even letting people near these areas when they were working.

The one thing that the center did have going for it was that the wildlife exhibits were two storeys tall so when you were on the top floor you could see the seals up on the rocks, and when on the bottom level you could watch them dive and swim.  This was of particular interest to me for the diving bird’s exhibit.  It was really neat to see them swim under water.  We were really surprised how much they use their wings from propelling though the water.  It’s like they are flying.  I thought that they mostly used their feet to kick, but not so.

Overall I was very disappointed with the Sea Life Center.  I would definitely not recommend it for the crazy price.  For $5 a person it would be a good use of time, but I would say save your money and go on one of the wildlife watching tours out in the ocean.  That is a far better use of time and money.

After the Sea Life Center we walked up one of the street near there that was full of shops aimed at us tourists.  I were really wanting to find something that is authentic and actually made in Alaska.  I would see things that I would like and then I would flip them over and “Made in China.”  What’s the use?  The point of getting something from Alaska to bring back, is that it is actually from Alaska!!  I didn’t really find what I was looking for, but at the last shop that we went in they had lots of made in Alaska product.  I pick a soapstone puffin with a whale bone base done by a craver out of Palmer, Alaska.  I really enjoyed the puffins with all their cute and quarky ways, so I thought that this would be a good representation.

By this time we wanted to grab some lunch so we went to a little bakery down by the harbour.  Really good food, but super busy.  After that we pack up and headed out of town.  We decided to go to Sterling, only about 80 miles out of Seward.  It was nice to be by the ocean, but the cold wind was getting to us and it was time to see some new scenery.  I picked a RV park out of the Milepost that had laundry.  We were in desperate need!  It is a cute little RV park with only about 35 spots.  It is called Real Alaskan RV and Cabins.  We got a kick out of the bathrooms as they look like old outhouses.  We were somewhat hesitant to go in, but when you go in they are really nice modern bathrooms with running water and flush toilets.  Everything is very clean.  The spots are nicely wooded to give you some privacy and free WiFi!  Yeah!  We did tasty kabobs on the hibachi and relaxed by the fire for the remainder of the night.  The weather really smartened up when we got out of Seward so it will be a nice night for a fire.