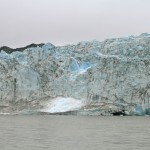 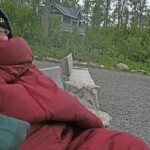 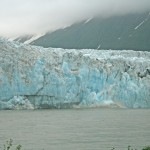 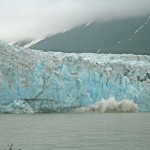 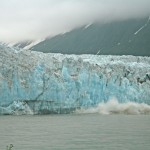 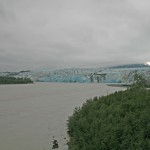 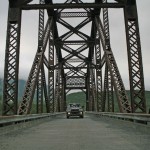 Today we spent a full day at Childs Glacier.  I didn’t talk too much about it yesterday because I wanted to save all the details for today.  After getting some time to sleep in we had breakfast and went down to watch the glacier again.  The camping area is situated a fair ways from the glacier, so we couldn’t see it from our spot.  There is a reason that they do this.  As I had mentioned before, the glacier calves into the Copper River in the warmer weather and as a result, large pieces of ice can create huge tidal waves.  They say that about 1-3 times a year a piece of ice fall off that is so big, it creates tidal waves over 5 feet that wash up onto the shore.  Every few years a rare even can cause waves that are up to 10 feet.  The decided to have the campsites so far away because in 1993 there was a tidal wave that was over 30 feet tall!  Wouldn’t want to be near that one!  If you doubt the wise signs then you can see for yourself rocks that have been transported from the river bed high up into the tree line.  Some of the waves are large enough that unsuspecting salmon get caught high up in the tree line.  One sign states, “Give bears first choice of all salmon.  Be aware!  Bears don’t share!”

Anyway, back to the glacier itself.  It is located in the Chugach National Forest in the Cooper River Delta.  It is a spectacular glacier quite large in size, but by no means the largest glacier in Alaska.  What makes this glacier so special is its very unique viewing location.  The Childs Glacier recreational area is located on one side of the Copper River and the Childs Glacier is on the other.  There are about 1200 feet (400 meters) between these two areas.  When you are on the opposite shore looking at the glacier you are seeing the spectacular face of the glacier.  It is about as large as a 20 story building! (300 feet)  Gives you some idea of what an amazing ice sheet we were looking for.  The glacier advances at about 500m per year, however it can never advance beyond the river because the Copper River undercuts and sculpts the ice face halting any further advancement.

These past few days at the glacier were bitter sweet because a silt storm had just rolled in the night before.  According to the locals a silt storm is similar to a dust storm in the desert.  The wind picks up and swirls around the silt from the Copper River Delta and covers everything with it.  Everything!  Every leaf of every tree seemed to be covered with this stuff.  It is so fine and seemed to get into every possible nook and cranny.  It was a good think in the fact that we could easily track the progress of the glacier as the old ice was covered in silt and when a piece calved you could easily tell the location since it revealed new, clean ice underneath.  It was amazing to see the progress of the glacier in the short time that we were here.  An interesting fact, the pieces of ice that are falling off into the river are anywhere from 50 – 100 years old!

Although we loved seeing this incredible glacier, it was a little frustrating.  It seems like no matter how much time we would spend at the glacier, as soon as we would head back to the campsite, we would hear it calve and we would miss it.  Very, very frustrating!  The glacier seems to be almost constantly moving and creaking.  When in ice moves it sounds like a thunderstorm rolling in.  When the glacier calves it sounds like a crack of lighting.  It is incredibly loud and just shakes the ground.  We can be sitting here at the campsite and know when a huge clunk of ice let go.  Some of these ‘lightening cracks’ sound so amazing we would have loved to be there to experience it.

Not all was lost though.  We did spend at least 7 hours (off and on) today to watch for something spectacular.  Sometimes it feels like watching paint dry!  We would see small chunks of ice fall into the river but we were really hoping to see something big.  Now when I say small chunks of ice; I mean anywhere from about the size of a minivan to about the size of your average house.  Later on in the day we noticed a large chunk of ice leaning a little precariously.  Now this chunk of ice would have been about the size of a 15 story building.  Huge!  With gravity and the river working against it, it came down with a huge splash!!  It was very cool.  About 15 minutes later another tower of some same size came down in that same location.  When that much ice hits the water it sends out a mini tidal wave towards the shore.  Anything that we saw today was definitely not capable of launching fish into the bushes.  This makes me ask the question, “How much ice has to fall off of this thing to make those kinds of waves?”  I guess this amazing event is much more likely to happen later in the year when the Cooper River is running high.  Nevertheless, the two big calves that we did see today were awesome.  What a neat experience!

Later in the day we thought that we should check out the Million Dollar Bridge.  It was a bridge that was built in 1910 to link the copper mines to the sea ports by railway.  Something had to be created to span across the fast flowing and precarious waters of the Copper River.  The bridge was partially destroyed in the earthquake of 1964 and not repaired until only a few years ago.  Now it is mostly a tourist site as the road at the other side of the bridge doesn’t actually go anywhere.  I recall reading that there were talks of extending the road to meet up somewhere north of Valdez but there are mixed feelings on that.  It would be very difficult and costly to build a road though the delta, also it seems that the people in Cordova like to have their privacy.  Even talking to the pilot yesterday he has mentioned that Cordova is a sort of hidden treasure.  No one really thinks about it, but it is very beautiful.

Tonight we had a simple supper of Mac and Cheese.  It seems like we are the only people camping here tonight.  It is very quite except for the odd ground shaking calve.  The campground hosts brought use fresh baked cookies which really warmed my heart.  Not too often strangers do something nice for other strangers.  I guess that’s the charm of going somewhere off of the beaten path.  (oh yeah, and the cookies were oatmeal with dried cranberries and they were awesome!)

We really enjoyed our time in Cordova.  I thought that it might be a waste of our valuable time in Alaska, but it was a real treat.  It was a real experience to go somewhere so remote.  If you ever do get a chance to make it to Cordova, do the Childs glacier, even at the expense of your tires!  My Formmers guide stated it quite nicely when they said that Childs glacier is not the largest glacier in Alaska, but it is the most magnificent.  I would have to agree!