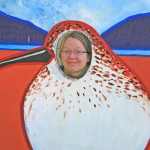 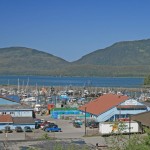 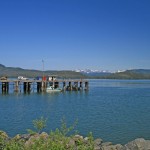 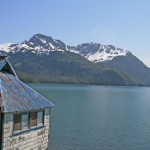 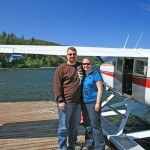 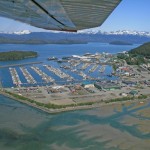 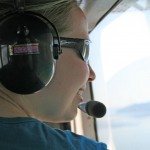 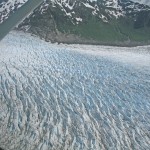 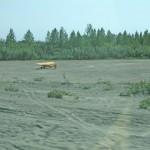 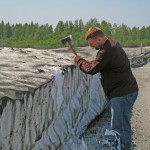 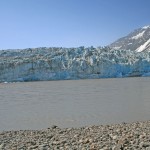 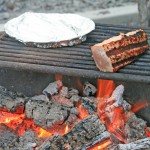 Today we woke up to another beautiful sunny day.  We woke up leisurely as we had nothing to do and no place to go.  We packed up the trailer at a slow pace and enjoyed some breakfast.  All the mossy trees looked very beautiful in the bright morning sunlight.  We passed though the town so rapidly last night that we decided to go the 12 miles back into town and get a good look.  Today is Sunday, so as you can imagine, nothing is open in a small town on a Sunday.  The main street is about 3 or 4 blocks long so we decided to park and walk through it.

The only place that was open in the whole town was the Killer Whale Cafe.  We stopped in and gave it a try.  The place was fairly busy all with people of about our age.  I guess going for their Sunday morning brunch (the only thing that they serve on Sundays).  Jason tried to see if he could get some cell coverage but with no success.  We have been very impressed with the cell coverage in Alaska, even in really rural areas.  I guess Cordova is just too secluded.

After brunch we decided to go back up the road to pick up our trailer before heading to the glacier.  On our way into town we noticed a place called Alaska Wilderness Outfitters.  On the way back we decided to stop in and see about getting a flying charter over Cordova while we were here.  There is an abundance of planes in Cordova.  Everyone either has a boat or a plane, or perhaps even both.  We thought going to an outfitter might be the best way, even with an elevated price tag.  We stopped in and talked to the chap who seemed to be the proprietor.  He was very helpful and told us to come back in an hour and he would have a pilot ready to take us up.

Just outside of Cordova is a large lake called Eyak Lake.  It is a beautiful emerald lake with mountains as backdrop.  The man from the outfitters suggested that we take the back road around the lake and check out some of the local sights while we waited.  The road around the lake was gravel but overall it wasn’t too bad.  There were some nice homes with a lakefront view and the airstrip for Cordova Air.  The road is right up against the mountains so we saw lots of little waterfalls cascading down into the lake.  The man suggested that we go to the end of the road for a best chance to see some salmon.  It is a little early as they don’t start spanning until the end of June.  We didn’t see any but the drive was still really scenic.  It was a nice way to spend an hour.  We had noticed on our drive into town, on the opposite side of the lake, there was an artificial weir where the salmon have to come through.  This area is used for fly fishing later on in the year.

We arrived back for our 1:00pm appointment at Alaska Wilderness Outfitters.  The owner couldn’t find a pilot on Sunday afternoon, no surprise there, so he said that they would take us up.  It was pretty good of him to take time out of his Sunday afternoon on such a short notice.  So into the Cessna 206 we went.  Being on Eyak lake, all the plane use floats, so this was the first time for both Jason and myself that we got to take off on a lake!  It was awesome!  None of that pesky taxiing and air traffic control.

So off we went.  There was not a cloud in the sky and the pilot said that this type of weather is very, very rare for Cordova.  They get lots of rain and nothing warmer than 65F (look at me all talking like an American!).  First we went over the ‘city’ of Cordova (all the small towns are called cities in Alaska since this calculation it is based on land, not population).  We flew over the harbour which houses about 300 boats.  We started over the ocean and the pilot pointed out ‘pods’ of sea otters that were swimming around in the ocean.  About 20 or 30 in each pod!  He said that sometimes they all get together and there can we hundreds of sea otters together out in the ocean. Quite a view to see from the sky!  As we were flying over the ocean we noticed a few private islands here is Cordova.  That would be quite the secluded location on top of this already really secluded location.

Our pilot talked about the impact of the 1964 earthquake as well.  It is hard to believe that that one even shaped the history of so many towns.  After the earthquake the land in Cordova shifted up over 20 feet.  Much of the fishing industry was affected because they were no longer by the ocean.  There were many hundreds of meters between the ocean and the old canneries.  As a result the canneries were shut down.  The pilot said that Cordova used to be the calm capital of the world before the earthquake.  After that, the calm beds were too close to the surface to sustain life.  That was another industry that dried up.  The land also changed dramatically as there are now miles and miles of swampy wetlands on the coast that were previously under the ocean.  It was a very interesting sight to see.

After touring the coastline for a while we headed back in land and he took us to one of the  glaciers in the area.  It is called the Sheridan Glacier and was an amazing sight to see from the air.  As we approached the giant glacier we could see rivers of silt water pouring rapidly away from it.  Flying over the glacier was spectacular as it appeared like millions of tiny mountains of ice.  We could look down into the crevasses of the glacier and see the water in between them.  It was the bluest water than one could imagine.  The pilot said that the water is so blue from the sun reflecting on the minerals that are in the glacier.

After the glacier we started back to the lake to land.  The pilot was very talented and made a smooth landing.  We had only paid for a half of an hour but we were up in the skies for at least 45 minutes.  It was a real treat!  Being up in the plane gave us a really good idea of what the Cordova area was like.  Cordova is very beautiful and I’m sure that if it was more accessible it would become another Banff.  The pilot says that the tourism industry is not very large here but there is lots of advertising for Copper River salmon, so the people that do come here specifically want that fish and will pay the big bucks just to get it.

After our flight seeing tour we went back to our campsite and picked up the trailer.  We were off to visit the Child’s Glacier.  I knew that it was about 50 miles on gravel, so we had asked to pilot, “How are the roads?” He said that they were good, but we came to find out that any sort of trail though the flats is a good road.  (The locals call the wetlands flats – they are a combination of rivers and sandy beach-like areas created by the slit from the glaciers)  The road was extremely dusty and there were so many of the locals on it.  Some places there were rocks on the road at least the size of two fists.  Many of the locals were taking advantage of the sunny weather and sunbathing or quading on the flats.  We came to one part of the flats and someone had landed their small Piper J3 Cub on the silt and was enjoying a day out with the family!  The things you see in Cordova!

We continued on over the dusty, slit road to Childs Glacier.  At this time of the year the glacier gets eroded away by the Copper River and many large chunks of the glacier fall off into the water.  They call this calving.  When a huge 10 story size of ice falls into the river, I guess it is a spectacular sight.  There were about 50 of the locals out here enjoying the view and the great weather.  There are daytime fire and food prep areas so people were having picnics.  We found a camping spot and dropped the trailer so we could hurry over to the glacier and get a peak.  We only saw it calve a few times and none of them were very major.

After some glacier watching we went back to our campsite and cooked up some supper; pork roast and potatoes.  Delicious!  Again the time change and the copious amounts of sunlight make it hard to get to bed early.  About 1:00 in the morning our time!  I’m thinking that it is bed time.