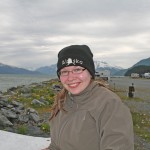 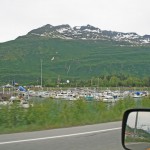 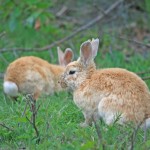 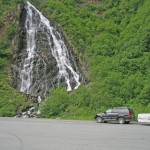 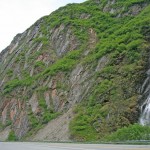 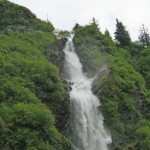 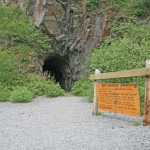 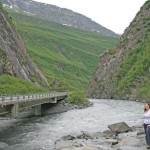 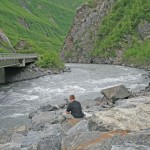 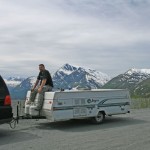 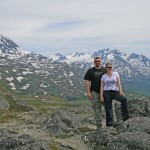 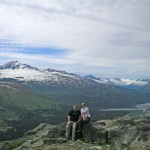 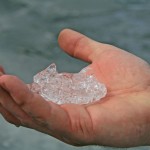 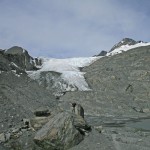 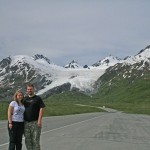 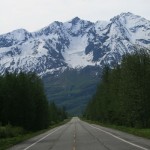 I woke up this morning really excited about our 180 km into Valdez.  This was the part of the trip that I have really been looking forward to.  From talking to my parents, I knew that the scenery was going to be breathtaking.  We rolled out of bed this morning hoping to see the same amazing view that we had last night, and we were a little disappointed.  It had clouded over in the night and the view was great, but not what we had the night before.  Never the less we decided to press on to Valdez.  After getting our trailer out of the precarious gravel road we were on our way.

We started down the road towards Copper Centre and thought that it might be interesting to check out that town.  I knew that there was a Princess Lodge there (owned by Princess Cruise Lines) and I was interested to see just how roughing it the cruise ship people would have it.  We made our way into Copper Centre and it was a very small town.  Mostly abandon shanties and not much else.  After consulting a map, we quickly found the Copper Centre Princess Lodge.  We went inside and WOW.  Talk about 5 star luxury!  They had huge cathedral like windows and big puffy chairs in the main area overlooking the Wrangell Range.  We have been to some pretty nice places, but this place was quite nice.  We decided that we best treat ourselves to some breakfast here.  It was great!  The whole time we were laughing with each other that this was totally not Alaska, but it was a nice switch from the past 6 days of roughing it!!

After traveling for a while we came across the Worthington Glacier.  We noticed that other campers were pulling into a rest stop so we decided to have a look as well.  There was a boardwalk to you could get up close to the glacier.  On a side note, that is one thing that I have noticed about Alaska; tourists are pretty much on their own.  You see the odd sign for points of interest, but many ones you could just pass right on by without ever knowing that there was something to see.  This Worthington Glacier was a good example.  I don’t think that we would have know to take the side road right up to it.  Anyway, enough with my complaining since it is such a refreshing change from Banff and Jasper.

After a few pictures of the glacier we were back on our way.  Not too far from the Worthington Glacier we came over a hill and had the most amazing view over the valley.  Unfortunately we couldn’t just stop on top of the hill and the designated stop area just didn’t have the same marvel.  We noticed that there was a walking trail off to the right where we could get a better view.  So packed with the camera, tripod, and bear spray, of course, we were off for our little mountain hike.  We hiked up onto of the ridge and the view was totally worth it.  We could see both directions over the valley.  The mountains here around Valdez are very different from the previous mountain.  They are very lush and covered with greenery that stretches right up to almost the tops of the mountains, followed by the snow-covered tops.  They almost look like something that would be in a tropical location; almost like the lush mountains of Hawaii.  We soaked in the view for about an hour and then decided to move on.

After this fabulous view the road quickly descends into the valley.  At this point the mountains are very close.  The mountains almost encompass the road as you drive into the valley.  On either side are these incredibly lush, green, mountains.  As you drive though this area it is very common to see waterfalls cascading down beside the road.  Of course all that water has to go somewhere.  We stopped to rest for a while by a swift moving river.  The water is full of silt as I’m sure it is coming from some glacier above us.  It is a little crazing to have all this water coming down around you with mountains on either side, knowing that there must be quite the large body of ice feeding all these rivers.

As we got closer to Valdez the mountains get even closer to the road.  It is hard to describe but there are literally walls of mountain on either side of the road.  We came around a corner and noticed a huge hole in the side of one of the mountains.  Of course we had to stop.  The sign said that it was an old railway tunnel.  It had been dug out by hand but never got completed due to a gun battle between two companies in 1907.  True stuff!  Gun flights!  This must have really been the wild west (really west!).  We did check out this tunnel armed with the bear spray (do you think that it is good for bats too??!).  It was very cool but too bad that it got all spray painted with names and the like.  It is a real piece of history and definitely worth stopping and taking a look.

Shorty after the tunnel we came to the two biggest waterfalls along the highway.  The first waterfall was called Bridal Veil.  It was absolutely beautiful.  It started with great velocity at the top of the mountain and cascaded down of various tiers down the entire mountain.  It was so tall that when I was looking up at it trying to get the best view my neck was starting to hurt!  When I was standing on the highway (on the opposite side from the waterfall) I was feeling the spray of the water hitting my face.  I was most certainly the tallest waterfall I have ever seen.  We got some great pictures and moved on to the next waterfall which was called Horsetail.  It was also beautiful but more wide spread and not nearly as tall.  These amazing waterfalls were only about 13 miles out of Valdez so we quickly came into the town limits after this.

We decided to check out some camping near the Valdez airport.  I don’t recall the name of the campsite but it was a great spot, but lacked the view that I was craving.  I figured that we came this far, we better get a chance to see the ocean.  We decided to continue onto the downtown of Valdez.  On our way back, right across from the airport, something caught my eye.  Here there were 3 bunnies in the ditch.  The cutest, most adorable bunnies you could ever imagine.  Of course I had to get these cuties with my telephoto lens!  They were very young rabbits and were doing some weird sort of rabbit Kung-Foo where they would run at each other and jump.  Very odd!  They did do the usually cute bunny stuff as well.

After this we headed into the actually town site of Valdez.  Interesting point…  The original town site was actually 4 miles from the current location.  It was moved in 1967 because the town was condemned due to unstable ground!  Anyway, Valdez is a very interesting community by the ocean.  You can definitely tell that it is a fishing community.  Everything revolves around the harbour.  The harbour is practically as big as the town!  It is very quaint and only touched by tourism out of necessity.  The town is not as large as I would have imagined.  All the major businesses are around the harbour with the housing several blocks away.  By this time we were famished after all that hiking and driving.  We definitely needed to experience some of this western seafood.  We stopped in at the harbour cafe.  It is a cute little restaurant half outside and half inside.  We decided to have the Cooper River Salmon.  Very delicious!  The restaurant was surprisingly modern in comparison to the rest of the town.

We decided to settle down in one of the local RV parks, as much as we hate to do that, the lure of Wi-Fi and hot showers gets us every time.  We decided to stay at the Sea Otter RV Park.  Don’t be deceived by the name.  There are no sea otters that we can see.  The big time benefit is that it is the RV park closest to the ocean, well actually right on the ocean front.  We got an ocean front spot (for $10 extra) and settled in for the night.

Being right on the ocean front we got to enjoy all the waterfowl and ocean traffic.  We really enjoyed watching the boats come in and out of the harbour.  Of particular interest was the Alaska ferry.  We watched the ferry dock in the Valdez harbour.  We noticed that the sea gulls were partially hilarious in this instance since they all flocked to the Alaska ferry.  I think that the only thing fish on that boat would be a fish sandwich, but I guess they associate the boat with food.  Kind of neat!

We settled in at the Sea Otter park and built a little fire in our granite rock fireplace right beside the ocean.  It was so peaceful, for an RV park.  We watched the birds and the boats.  All new and interesting to us.  The view from our campsite is very beautiful as we are surrounded by mountains.  The wind has picked up significantly as I end this writing.  Let’s see how our tent trailer fairs in these Alaskan winds.  It is predicted to be rainy tomorrow, but we are looking forward to just relaxing for a day.

Posted under Adventures and tagged with Alaska, Glacier, Princess Lodge, Valdez
Comments Off on Alaska Adventure – Glennallan to Valdez