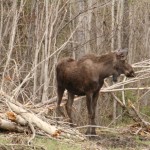 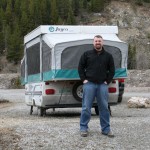 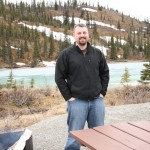 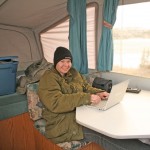 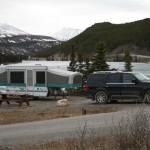 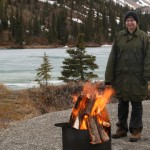 So today was pretty exciting because we knew that we would be starting on the Alaska Highway.  We got up around 7:00am and packed up the trailer with the quickness due to the predicted rain.  We were fortunate not to get any rain so we were able to enjoy a leisurely breakfast.  After breakfast we headed towards Dawson Creek.  The weather was a little cloudy but we were able the see the tops of the Rockies all highlighted by the sun.  Our view of the Rockies was short lived as we headed towards Beaverlodge.  We had to stop for a picture with the huge beaver.  I think that it’s the world’s biggest beaver but my Milepost book said something about it rivaling a beaver statue in Manitoba.  Leave it to Canadians to make over-sized statues of everything!

In about an hour we rolled into Dawson Creek to stop for a quick Tim’s and of course a picture with the mile 0 post.  Well actually I think that we might have missed the historical mile 0 sign post but we did get a picture at approximately mile 0.  When I looked into my book and realized that this was not the same milepost that my parents had taken a picture at 30 odd years ago, I wanted to turn around and go back, but the rains put a stop to that.

We made a quick stop in Fort St. John for gas and then onto the very long road into Fort Nelson.  We had cloudy weather most of the way with the odd rain shower.  It is really beautiful country up there with huge vast valleys carpeted with lush green trees.  We would see signs that said “reforested in 1988” and there would be these little trees dwarfed by the other huge trees.  I guess it gives you an idea how long it takes to grow one of those 100 foot trees.  Not too much exciting going on from Dawson Creek to Fort Nelson.  So 5 hours later we rolled into Fort Nelson in the rain.  Filled up with gas and grabbed a quick bite at Boston Pizza.

At this point we decided that we wanted to try to continue on towards Watson Lake.  I have been finding the whole trip from Grand Prairie deceiving because you are always on the edge of the Rocky Mountains.  So you see them in the distance and think “Hey, we are going to be in the mountains any minute now.”  So 7 hours later we were finally in the Rockies.  I guess these mountains are called the Northern Rockies.  So far not as majestic as the Rockies in Banff and Jasper, but I have high hopes.  About an hour out of Fort Nelson we had the pleasure of running into a moose.  Fairly scared of people and people were fairly scared of it, which is good to see.  It is still a very wild animal.  There was some plant of interest to the moose by the edge of the road so we waited for it to get brave and come out of the trees; however every passing car scared it back into the bush.  This was definitely the closest shot we have ever got of a moose.

We continued along the Alaska highway though the Rockies.  We stopped for a few great photo opportunities and we were starting to get a little played out around supper time.  My goal was to reach Muncho Lake but we came across Summit Lake Provincial Park and decided to call this home for the night.  We picked a perfect spot right beside the lake.  I was a little skeptical of this site since it was in a valley and right beside an icy lake; fearing that wind may be a problem.  We were the only people there and we were thinking that perhaps there was some reason why no one else was staying at this camp spot.  Sure enough after we get the trailer set up the “Park Official” comes along.  We thought for sure he was going to kick us out since the park appeared to not even be opened yet.  But he just took our money, delivered wood to our door, and chatted for quite awhile.  We cooked up another delicious steak supper and then enjoyed a campfire with all this great remaining daylight.  On a side note, the park official mentioned that this very spot is the highest point on the Alaska highway.  This site turned out to be absolutely perfect.  We are hoping to find lots more just like this!!